ARVC is an acquired adult onset disease which affects both female and male dogs equally.  The disease is characterized by loss/death of the heart muscle cells, particularly of the right ventricle (hence the name of the disease).  This leads to replacement of these cells with excessive fatty and scar tissue.  This replacement of the normal muscle can disrupt the electrical activation of the heart muscle, leading to significant ventricular arrhythmias (ventricular premature contractions, ventricular tachycardia and ventricular fibrillation).  This is the most common presentation of the disease.  In some patients, the significant loss of heart muscle cells leads to dilation and weakening of the heart and a risk for congestive heart failure.  As the right side of the heart is most typically affected, this means the development of right sided congestive heart failure with fluid accumulation in the abdomen and in some cases, within the chest cavity.  In some individuals, there is significant involvement of the left ventricle as well leading to a risk for left sided congestive heart failure (fluid retention within the lungs known as pulmonary edema).

The disease is common in humans where several genetic mutations causing ARVC have been identified.   In the Boxer dog, a mutation in a gene called striatin has been found.  A genetic test is available through the cardiac genetic laboratory at North Carolina State Veterinary Hospital (https://cvm.ncsu.edu/genetics/).  Not all dogs who test positive for the mutation will develop disease, but dogs with both copies of the mutation (homozygous) are more likely to develop a more significant form of the disease with more arrhythmias.  This test is non-invasive and can use saliva or blood to test for the mutation.

Affected dogs are at risk for clinical signs of syncope (fainting), near-syncope (weakness/wobbliness), exercise intolerance and even the possibility of sudden death. Congestive heart failure is a possible outcome of this disease and can be associated with signs of difficulty breathing, coughing, and abdominal distension.  Cats are more likely to develop CHF with ARVC due to significant dilation and weakening of the right ventricle due to significant loss of ventricular muscle cells.

The average age of onset of the disease is typically about 6 years of age.  The disease is generally best diagnosed using an extended electrocardiogram (ECG) called a Holter monitor that the patient wears for a full 24 hours.  This allows identification and quantification of ventricular arrhythmias over a longer period of time than what can be captured during an in-hospital ECG.  Generally affected dogs will have many ventricular premature contractions (VPCs) that will originate primarily from the right ventricle.  Echocardiography is often used in conjunction with Holter monitors to rule out other causes of VPCs, assess heart size and function and evaluate risk for the development of congestive heart failure.  The screening of higher risk individuals (particularly Boxers) is recommended after the age of 3.  It is important to remember that a negative Holter (no significant arrhythmias) does not exclude the possibility of developing the disease later in life.  For this reason, annual Holter monitors are generally recommended. 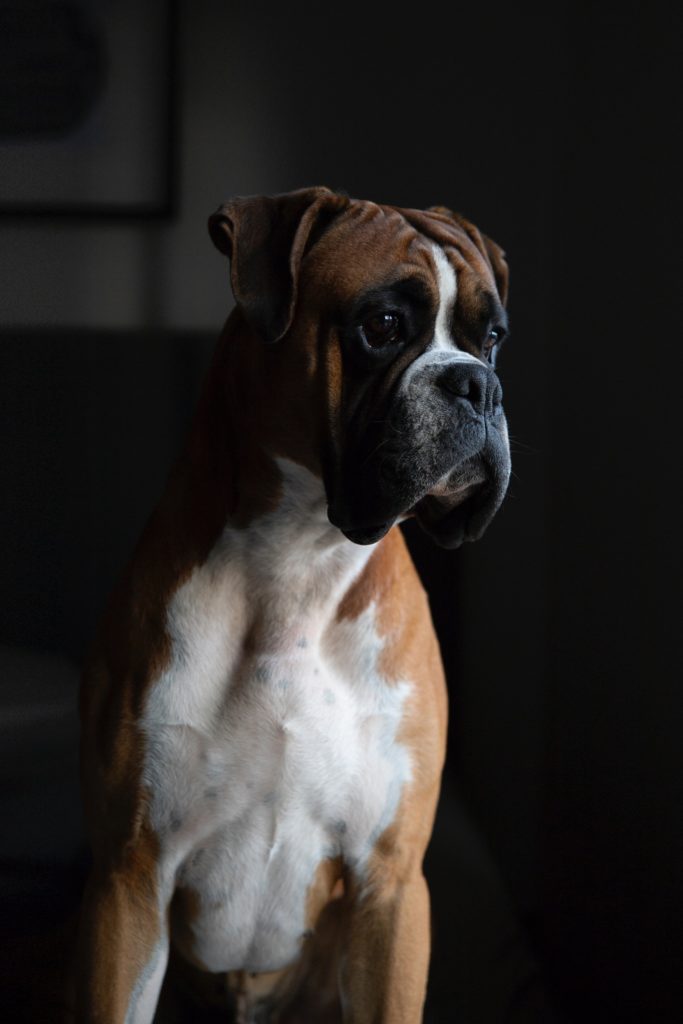 Therapy for affected dogs generally involves the use of anti-arrhythmic medications.  These are human medications and are typically given two to three times per day.  In many dogs, the initiation of a beta blocker will represent the first line of therapy.  Evaluating the response to medical therapy generally entails a recheck Holter monitor to ensure that the arrhythmia frequency is reduced.  The goal of anti-arrhythmic therapy is to reduce the frequency of the arrhythmia to improve/resolve clinical signs such as fainting.  The use of anti-arrhythmic therapy may not prevent the possibility of sudden cardiac death.  For those dogs with evidence of congestive heart failure, medical therapy with diuretics and ACE inhibitors may also be prescribed, along with therapy to improve the strength of the heart muscle (Vetmedin).

Prognosis of the disease is quite variable.  In dogs with milder forms of the disease, they can be managed long term with anti-arrhythmic therapy without significant impact on quality or length of life.  For those dogs who develop congestive heart failure, prognosis is generally guarded with survival times of less than 12 months typically reported. The percentage of dogs who are at risk for sudden death is not known at this time, but all patients with ARVC should be considered at risk.  The prognosis in cats is generally poor with survival times of only several months (generally less than 4 months) reported.

An ECG from a Boxer with ARVC – the wide and bizarre complexes represent ventricular premature contractions (VPCs).  The run of VPCs is called ventricular tachycardia.  As the VPCs are positive (upright), they likely originated from the right ventricle.  The narrower complexes are normal sinus beats.