Atrial premature contractions or APCs (also called supraventricular premature contractions) are early abnormal (ectopic) beats that arise from the top chamber of the heart, the atria.  In the normal cardiac conduction system, each contraction of the heart is controlled by what is called electrical depolarization.  Depolarization of the heart originates from a specialized collection of cells called the sino-atrial (SA) node that sets the rhythm and rate of the heart.  In a normal individual, this is the only location within the conduction system that can “drive” the heart’s rhythm.  In animals with APCs, there is another focus (located somewhere in the atria) that develops the ability to depolarize the heart, thus interrupting the normal rhythm.  APCs are noted commonly in both dogs and cats.

APCs generally occur secondary to structural heart diseases which often cause enlargement and stretch of the atria.  Examples of common heart diseases include valvular heart disease and cardiomyopathy.  In some animals, APCs can occur secondary to cancers that originate from the atrium.  In young animals, a low frequency of APCs can be normal and can be self-limiting (resolve with maturity).  APCs in young animals can also be the result of a type of congenital malformation of the cardiac conduction system called an accessory pathway.  Accessory pathways consist of abnormal tissue that allow communication between the atria and ventricles (besides the typical site of electrical communication called the atrioventricular node) and can allow the establishment of a tachycardia circuit.  These accessory pathways are more commonly reported in young Labrador Retrievers and can result in a sustained run of APCs known as supraventricular tachycardia or SVT.

In some cases, APCs can be the result of extra-cardiac illnesses such as electrolyte abnormalities, anemia, endocrine disease (such as thyroid disease) or trauma.

Single APCs will not result in any overt clinical signs.  However, a run of APCs (SVT) will generally result in signs of labored breathing, exercise intolerance, weakness and collapse (fainting).  Surprisingly, some animals will be largely asymptomatic despite having a rapid sustained heart rate.  SVTs are less likely to result in sudden death (when compared to ventricular tachycardia).  Diagnosis of APCs is made using an electrocardiogram (ECG) after an arrhythmia is detected on a physical examination.

When APCs are first diagnosed from an ECG, further diagnostic testing is indicated to help determine the underlying cause.  Typically, an echocardiogram will be the first diagnostic step to screen for the presence of heart disease that may result in APCs.  An echocardiogram is a non-invasive ultrasound of the heart and can evaluate for the presence of structural cardiac disease (such as valvular disease, cardiomyopathy, cardiac cancers) which can result in APCs.  If no structural cardiac disease is found, then extra-cardiac evaluation is considered with bloodwork (complete blood count, chemistry, urinalysis, thyroid testing, biomarkers to evaluate for heart inflammation called myocarditis), thoracic radiographs and sometimes an abdominal ultrasound. If a young animal is being evaluated for APCs and there is concern for a congenital accessory pathway, a specialized ECG called a Holter monitor will typically be pursued.

The test to help the decision to treat APCs is a 24-hour ambulatory ECG called a Holter monitor (pictured to the right are the small, light-weight Holters that East Coast Veterinary Cardiology utilizes).  This is a small device that is worn to record every heart beat in a 24-hour window.  The Holter can then help determine the frequency and malignancy of the arrhythmia and requirement for treatment.  Holter monitors are then often used to follow response to therapy long term.  If an SVT is left untreated, some animals will develop secondary heart dilation and dysfunction called tachycardia induced cardiomyopathy which can result in congestive heart failure (CHF). 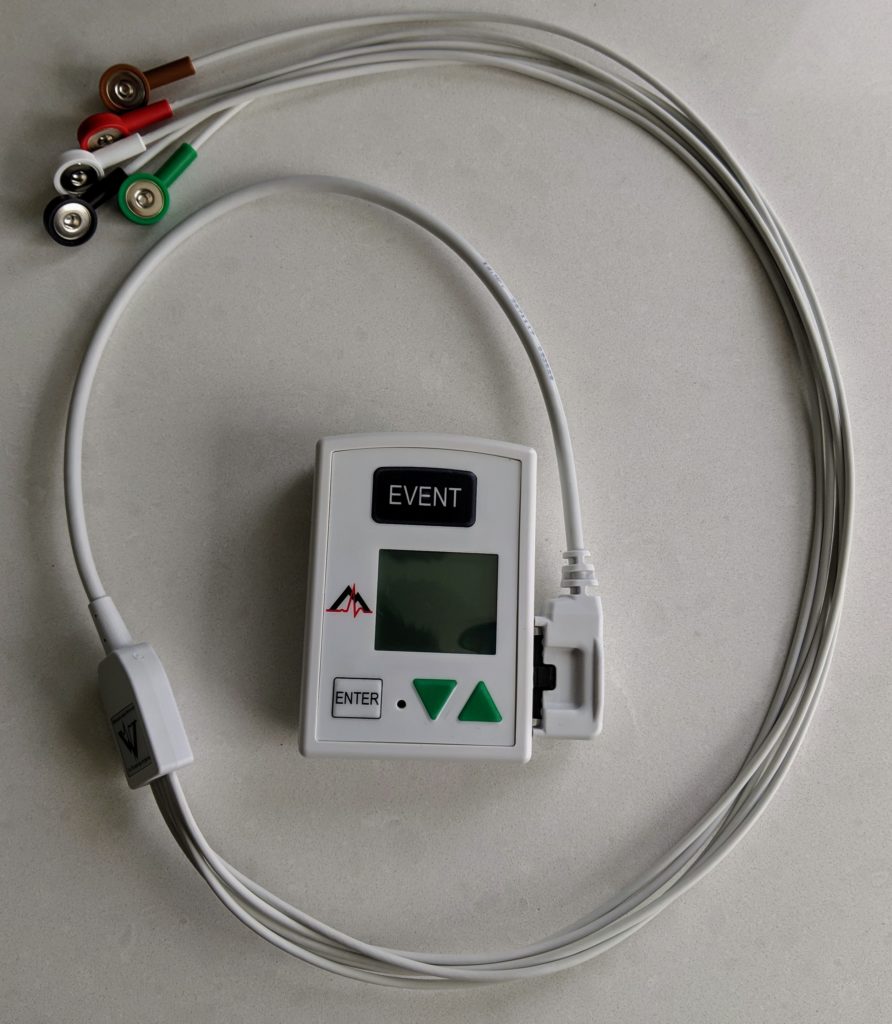 Treatment of APCs and SVT consists of addressing any primary causes and when necessary, the addition of anti-arrhythmic medications.  There are several anti-arrhythmics which may be used include beta blockers (such as sotalol, atenolol, carvedilol) and calcium channel blockers (diltiazem).  If a congenital accessory pathway is diagnosed, there is the option of ablation of the pathway – this entails the use of a special catheter inside the heart that applies thermal injury to the abnormal tissue to prevent electrical conduction across it.  There is a centre in Ohio that provides this interventional treatment for animals.

Prognosis is dependent on the underlying cause of the APCs – generally the underlying disease causing the APCs will determine the prognosis.  If they are related to extra-cardiac illness, in some cases the APCs will be self-limiting once the illness is treated/resolves.  If your pet has been diagnosed with APCs, it is important to monitor for signs of exercise intolerance, weakness or fainting, and sudden labored breathing and contact a veterinarian if signs are noted.  If your pet is receiving treatment for APCs, it is very important to give the medication(s) as prescribed and never stop them abruptly unless directed to do so by a veterinarian.

An ECG from a patient with a run of APCs called supraventricular tachycardia (SVT).  The first 6 beats from the left of the tracing are normal (sinus beats), followed by an abrupt onset of SVT.  APCs generally will look very similar in morphology to the sinus beats – that is how they are differentiated form another type of early beat called a ventricular premature contraction or VPC (often VPCs will look wide and very different from the normal sinus beats).