Chronic cough is a common presenting complaint in older, particularly smaller breed, dogs.  Determining the cause of the cough is important so appropriate therapy can be initiated.  However, some causes for cough cannot be cured and the cough will be chronic meaning the goal of therapy for animals with chronic cough will be to minimize the severity of the cough as best as possible.

Cough is a protective mechanism to clear the airways of foreign material – some animals may intermittently cough after drinking water too quickly or pulling on the leash with excitement which may be normal.  A chronic, persistent cough suggests the presence of underlying disease that should be evaluated.  There are many causes of cough in animals – it is important to remember that cough in an animal with underlying heart disease does not necessarily equate to the presence of congestive heart failure (CHF).  Some owners wonder if the character of the cough can help veterinarians understand the etiology – is the cough productive or not, is it soft or honking?  Unfortunately, there is much overlap for potential causes and character of the cough that makes this an unreliable way to determine the cause without additional diagnostics.  There may be other clues from behaviors at home that may help us better evaluate the cause for the cough – patients who are coughing with CHF will often have faster than normal breathing rates and may have some other non-specific signs such as lethargy and a reduced appetite.  Whereas dogs with airway disease as the cause for their cough often will have a normal respiratory rate at home and may otherwise seem fine between coughing fits.

The first initial diagnostic test to better evaluate etiologies for chronic cough are thoracic radiographs (x-rays).  Fortunately, radiographs are non-invasive and allow veterinarians to not only evaluate the airway (trachea, bronchial tubes) but also the heart and blood vessels in the lungs.  This can tell us a lot about possible causes for cough.

As cardiologists, we are always interested in evaluating cardiac causes for cough first.  The most significant worry is the presence of CHF which can occur secondary to any disease which affects the left side of the heart.  In veterinarian medicine, thoracic radiographs are our best tool to diagnose CHF.  In CHF, we generally expect to note left sided heart enlargement with pulmonary infiltrates in a patient with CHF.  In some animals with CHF, enlargement of the pulmonary veins will also be noted.  If pulmonary edema is noted, then therapy for CHF is initiated (or medications adjusted if there has previously been a history of CHF) and the cough should generally improve within 1-2 days.

However, some patients with heart disease will cough due to their heart disease, but not because of CHF.  In dogs with significant left sided heart enlargement (especially small dogs), there can be compression of the airway secondary to left atrial enlargement.  This is because the trachea bifurcates into the mainstem bronchi at the level of the left atrium.  These small breed dogs generally have underlying airway disease called bronchomalacia (a softening of the airway walls) that predispose them to experiencing airway collapse when the left atrium becomes enlarged.  Therapy for this type of cough is palliative as there is no way to eliminate this cause of cough completely.  There are several strategies that cardiologists will explore to manage this cough including optimization of cardiac therapy (adjusting vasodilator, diuretic and Vetmedin dosing) to reduce left atrial pressures but also exploring cough suppressants to reduce the cough reflex.  If the cough is very significant, a low dose of a steroid may be considered to break the cough cycle. 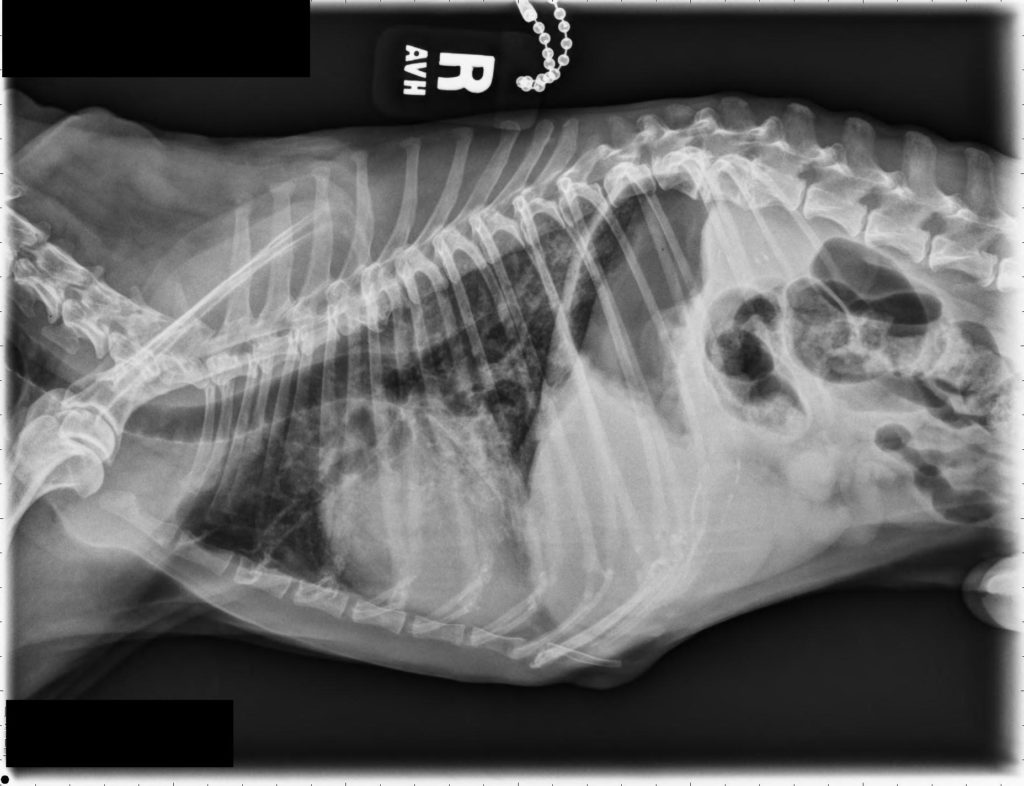 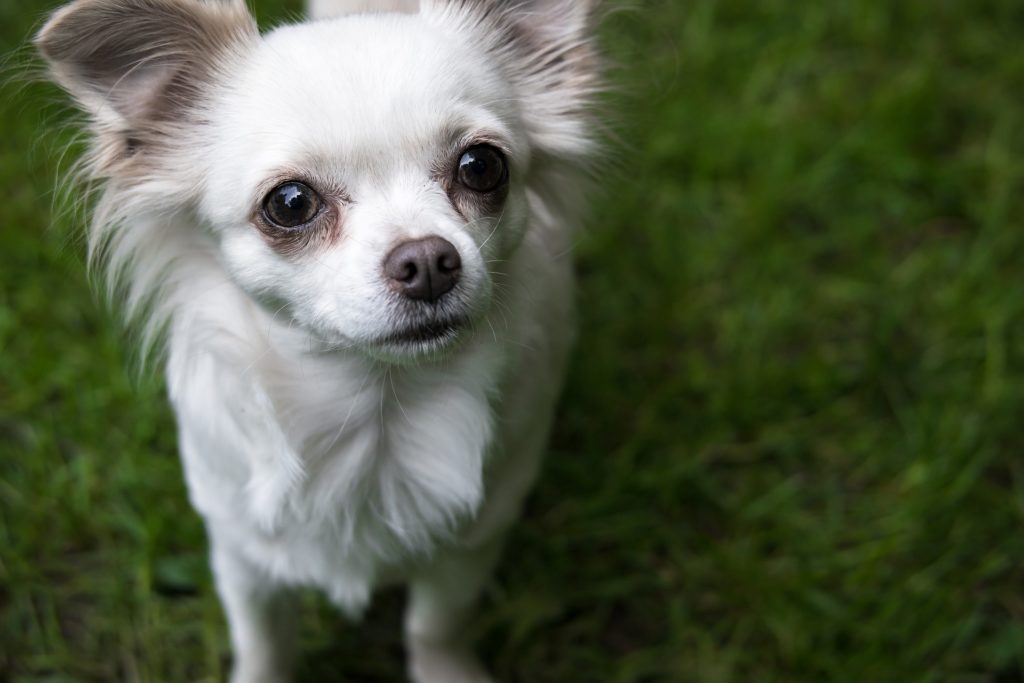 When cough is not related to cardiac disease, it can be related to underlying airway disease.  Common causes may include collapsing trachea, chronic bronchitis, pneumonia, parasites and unfortunately cancer in some animals.  Collapsing trachea is common in smaller breed dogs (Yorkies, Chihuahuas) and is progressive over time.  The cough with collapsing trachea is often described as goose-honk in quality.  Thoracic radiographs sometimes will capture tracheal collapse but a trachea of normal diameter on a static thoracic radiograph does not rule out collapsing trachea.  A real-time radiograph (called fluoroscopy) is the best test to assess for dynamic (intermittent) tracheal collapse.  Therapy for tracheal collapse is palliative with cough suppressants, bronchodilators (to improve airway distal to the area of collapse), judicious steroids, weight loss and use of a body harness as opposed to a neck harness.  Tracheal stents have been used in dogs with collapsing trachea, but this is generally only recommended when a patient with collapsing trachea has failed other medical strategies.  Tracheal stents can be associated with significant complications and dogs with stents will continue to cough even after stent placement.

Chronic bronchitis is another cause for chronic cough in dogs.  This is a frustrating condition for both veterinarians and pet owners as this cough is chronic and progressive.  The cause of bronchitis in dogs is generally allergic where over time, there is chronic inflammation that leads to airway remodeling.  Dogs with bronchitis generally have airway wall thickening, bronchospasm and increased airway mucus secretion.  Bronchitis can be presumptively diagnosed from a thoracic radiograph (a bronchial lung pattern in absence of other pulmonary changes may be suggestive) but airway scoping with airway secretion sampling (and culture of airway secretions) is considered the gold-standard way to diagnose this condition in animals.  Therapy for bronchitis varies, but generally consists of cough suppressants, bronchodilators, antibiotics (if a secondary infection is present), weight loss, steroids (oral or inhaled), airway nebulization therapy and mucolytic therapy.

Other less common causes for cough in an older dog may include pneumonia or parasites (heartworm disease, lungworm, etc.).  Pneumonia can typically be diagnosed from a thoracic radiograph – diagnosis of lung parasites may require a special fecal sample.  Therapy in these cases would entail antibiotics and anti-parasitic treatment respectively.  Heartworm disease is diagnosed from a blood test (heartworm antigen test) and radiographs often reveal enlargement of the pulmonary arteries in affected animals.  Some animals with diseases of the pleura (lining of the thoracic cavity) will cough – it has been noted that free fluid in the chest (pleural effusion) can lead to a cough in dogs and cats.

Coughing in cats typically occurs secondary to feline allergic airway disease (asthma).  It is considered uncommon for cats with CHF to cough.  Cats with asthma often have changes on thoracic radiographs to suggest the presence of allergic airway disease – hyperinflated lungs (due to air trapping), a bronchial lung pattern, and sometimes collapse of the right middle lung lobe.  Therapy for the asthmatic cat is eliminating any potential airway allergens, using an inhaled steroid and sometimes a bronchodilator.