Heart block refers to interruption of the electrical signs that stimulate the heart to contract.  To understand heart block, one must first understand some basic anatomy of the wiring of the heart.  Animals have a similar cardiac conduction system to humans.  The electrical command center of the heart (known as the pacemaker) is a specialized collection of cells called the sino-atrial (SA) node.  The SA node is located within the right atrium.  It fires (depolarizes) in regular intervals which in turn stimulates the atrial to contract.  The electrical signal reaches another collection of specialized cells called the atrio-ventricular (AV) node.  This is the gatekeeper between the atria and ventricles and purposefully slows the speed of conduction to allow time for the ventricles to fill completely with blood prior to their contraction.  After the AV node, the conduction system is made up of specialized fibres which innervate the ventricles – Bundle branches and Purkinje fibres.  Once these fibres are depolarized, the ventricles contract to eject blood from the heart.

Heart block refers to interruption of conduction at the level of the AV node.  There are three classifications of heart block, but we are only concerned about two classifications in animals.  Heart block is diagnosed by performing an electrocardiogram (ECG).

2nd degree AV block is a type of block where some signals can pass normal through the AV node while others become blocked.  This will cause a sudden pause/interruption in the rhythm of the heart.   2nd degree AV block type I is generally associated with high vagal tone (the nervous system influence that slows heart rate) and is physiologic in animals.  This type of block is commonly noted during general anesthesia in animals.  The administration of atropine generally resolves this type of block. 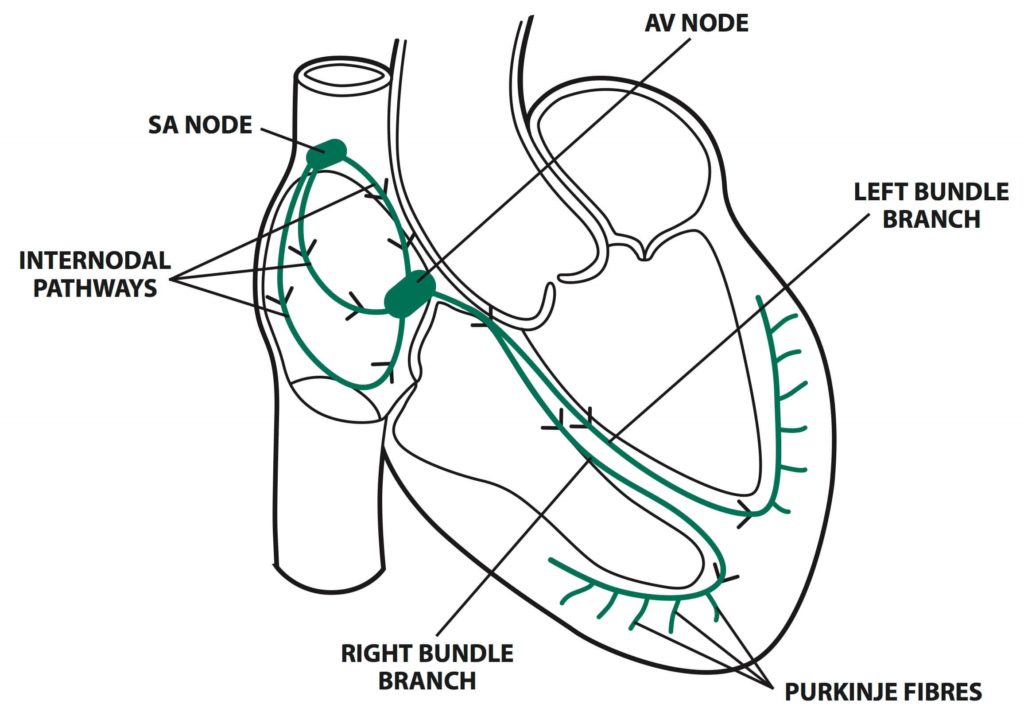 Complete or 3rd degree AV block is where the electrical signs are completely blocked at the AV node and no signals can reach the ventricles from the atrium.  When this occurs, the heart rate becomes very slow and a subsidiary pacemaker site located in the ventricles will take over depolarizing the ventricles to ensure that the ventricles continue to contract.  We call this an escape rhythm.  Unfortunately, the escape rhythm in animals is often too slow, resulting in clinical signs of weakness and collapse.  In dogs, the escape rates can vary between 20-60 bpm, while in cats the rates are generally faster at 100-130 bpm (the normal heart rate in the dog is breed dependent but is generally > 80 bpm and in cats it is generally > 160 bpm).  Complete heart block in cats can be an incidental finding and may result in no clinical signs.  In those animals with a lower escape rate, over time the heart will enlarge and affected animals will be at risk for development of congestive heart failure (CHF) where they have fluid retention in their lungs and sometimes outside the lungs and free in the abdominal cavity.

The cause of 3rd degree AV block in animals is often idiopathic meaning there is no identifiable cause.  Any breed can be at risk for this arrhythmia.  Pugs have been diagnosed with a juvenile form of heart block that affects young dogs.  In some patients, 3rd degree AV block is secondary to heart muscle inflammation called myocarditis (Lyme disease has been associated with heart block), cancers of the heart muscle and sometimes secondary to drug toxicities (such as beta blockers, digoxin).

The treatment of choice for 3rd degree AV block is placement of a transvenous pacemaker system for those patients who are symptomatic for their heart block as well as those at risk for progressing to CHF.  The pacemaker is placed via a minimally invasive surgery by introducing a pacemaker lead through the vein in the neck (jugular vein) and passing it into the right ventricle.  A small pacemaker generator is attached to the lead and is placed under the skin in the neck region.  Pacemaker therapy is well tolerated in animals and has been shown to improve the length and quality of lives in animals with heart block.  Potential complications can include lead fracture, lead migration or development of a blood clot on the pacemaker lead.  It is very important that animals are restricted from activity for the first 6 weeks after pacemaker placement.  The battery life in modern pacemakers generally lasts for years (with some lasting the life of the patient!).  Without pacemaker placement, prognosis is guarded for patients with heart block and CHF.

Above: An ECG demonstrating 2nd degree AV block type I.  There are several components to an ECG – the small complexes preceding the large spikes are called P waves and represent atrial activation.  The tall spikes represent ventricular activation and are called QRS complexes.  The smaller spike following the QRS is called a T wave and represents ventricular repolarization.  In this ECG, there are P waves that are not followed by QRS complexes as the signal is being blocked in the AV node.

Above: An ECG of 3rd degree AV block.  Note there are multiple P waves (atrial activation) not followed by a QRS complex (ventricular activation).  There is no association between the P and QRS complexes.

Above: A thoracic radiograph from a dog with a transvenous pacemaker.  Noted the pacemaker lead traveling down the neck into the heart (right ventricle).  The lead is attached to a generator that is present under the skin over the neck.